Have you ever put off reading a "classic" because in some respect that made the book boring? or long? or hard to understand?  Well, if you haven't, I know that I have.  The Odyssey is one of those books I knew I should read but somehow I never got around to reading.  Now that I have, I wonder why I waited so long.

The Odyssey
by Homer 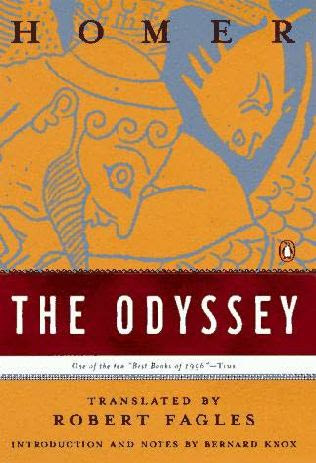 Thought to have been composed near the end of the 8th century BC, The Odyssey is the second work of western literature with Homer's Iliad considered to be the first.

The epic poem was originally delivered orally and when you read it, you find repetitive phrases that would have made Homer's audience remember key elements.   I love how Homer consistently used this  description of the sun.


"when the young Dawn with fingertips of rose made heaven bright..."

Odysseus, the king of Ithaca, has been gone for almost 20 years.  The first 12 chapters describe how his son, Telemachus and his wife, Penelope, have handled his absence and what has been transpiring in his home since  his departure to Troy.  Suitors have come requesting Penelope to remarry and choose among them.  Meanwhile, they deplete the resources of the estate and plot the demise of Telemachus.  The last 12 chapters explain what has kept Odysseus from returning and tell of his homecoming.

Hospitality is a main theme that weaves throughout the poem.

"...friend, rudeness to a stranger is not decency, poor though he may be, poorer than you.  All wanderers and beggars come from Zeus.  What we can give is slight but well-meant ..."

Greek gods and goddesses also feature prominently in the epic.  Athene, daughter of Zeus, in particular, plays a strong role in the life of Odysseus and his family.

"A poor show, that --- hitting this famished tramp---bad business, if he happened to be a god.
You know they go in foreign guise, the gods do, looking like strangers, turning up in towns and settlements to keep an eye on manners, good or bad."

The story is captivating and timely and has much to say about the traits of honor, deception, loyalty, and courage just to name a few.

This September, I joined Edie over at lifeingraceblog and many others to read The Odyssey as part of an online book club .  We're reading the classics together and would love to have you join us! Check it out here.  This month, we're reading Sophocles' Antigone.

"Do not forget to entertain strangers, for by so doing some people
have entertained angels without knowing it."
Hebrews 13:2  NIV Bible