I really like to travel.  I like people watching and visiting a grocery store in a new place.   Kinda quirky I know, but I think you get a glimpse into the lifestyle of others when you see what they buy and eat. Since I was born on a Thursday maybe that's why I like to travel because according to the "Monday's Child" rhyme I have far to go.

However, you don't have far to go to enjoy this book; maybe your computer to order it or your local library.  I've read several books by John Steinbeck but this book has a special quality to it.


Travels with Charley: In Search of America
by John Steinbeck 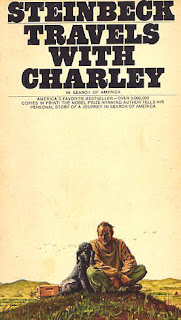 In his late 50's, John Steinbeck decided that he wanted to take a journey and travel across America so he embarked on a trip with his beloved dog, Charley.   The trip took him from one side of the nation to the other and across the Deep South.

"When I was very young and the urge to be someplace else was on me, I was assured by mature people that maturity would cure this itch. When years described me as mature, the remedy prescribed was middle age. In middle age I was assured that greater age would calm my fever and now that I am fifty-eight perhaps senility will do the job."

The trip began in September of 1960,  Steinbeck's keen observations of people and the experiences he has on the road are a valuable insight into that era and an intimate insight into Steinbeck himself.

"A trip, a safari, an exploration, is an entity, different from all other journeys. It has personality, temperament, individuality, uniqueness. A journey is a person in itself; no two are alike."

"but no stranger had to spend the night in the street, for my door was always open to the traveler"
Job 31:32 NIV Bible