The Hitchhiker's Guide to the Galaxy
by Douglas Adams 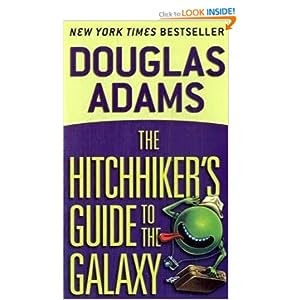 How to explain this book...hmm...42.  If you've read the book, you know what I'm talking about; if not, I'm sorry to keep you in the dark.  And if you saw the movie, the book is so much more.

A comic outer space adventure with elements similar to Monty Python.  The Hitch Hiker's Guide to the Galaxy  began as a radio series for the BBC and eventually, turned into a bestselling book series for Mr. Adams.

Earthling Arthur Dent finds himself  hitchhiking through space with his friend, Ford Prefect because the earth has been demolished, in order, to make room for an interstellar highway.  Ford Prefect is a researcher for the Hitchhiker's Guide which is described as follows,

" In many of the more relaxed civilizations on the Outer Eastern Rim of the Galaxy, the Hitch Hiker's Guide has already supplanted the great Encyclopaedia Galactica as the standard repository of all knowledge and wisdom, for though it has many omissions and contains much that is apocryphal, or at least wildly inaccurate, it scores over the older, more pedestrian work in two important respects. First, it is slightly cheaper; and secondly, it has the words DON'T PANIC inscribed in large friendly letters on its cover."

Ford and Arthur are joined by an assorted cast of wacky characters including Deep Thought, a computer,  preparing to answer the great question, " What is the answer to Life, the Universe and Everything?"

" The heavens declare the glory of God; the skies proclaim the work of his hands."
Psalm 19:1  NIV Bible